All the students felt relief last Friday because of the end of the school year. For us it is also the break from the educational activities but we’re hoping to come back in September.

It started to be shy and partisian but in result it was really fun and just proper. Thanks to Agata we were able to conduct 4 more lessons, so since January there were 12 lessons all together. According to data, which were released by Scientix project about 1000 schools in Poland took part in our online classes. There were even some schools that we could rely on in each transmission. Well, some of schools were interested in online classes in September. Not even mentioning that some even invited us after coming back to Cracow.

Unfortunately, the quality of connection was bad that we actually couldn’t make video transmission so our voice, photos, presentations, films and Agata’s stories (who took the initiative skillfully when some higher power cut off the internet) had to be enough.

But how it looked behind the scene? We had to wake up at 5 o’clock local time here to be able to talk quite well at 6 (all the lessons started at 11 polish time). No even mentioning about checking weather conditions and sacrificing to nature’s Gods – strong wind and icing antennas mean weak signal and in result, those are the problems with the connection. In such cases poor Peter always heard something like this “oh, do something with it”.

Because in the station we use two satellite connections from two different suppliers, in the emergency situations when one could fail, we can use another one. But it makes sense right before the lessons not during them because the whole thing with logging onto the e-learning platform can even take about several minutes. Luckily, there wasn’t any problem, maybe once or twice with the sound but Agata helped us then.

Despite of video lack, my born esthetic sense made me to wear more proper (at the end, in such a place we have to fight with progressing running wild). I remember like in Hornsund we took part in online conference (with video, because the connection was faster)- we were half-dressed gallium and another half we were dressed in tracksuit bottoms and spotted socks. So, here we were in no danger like this. 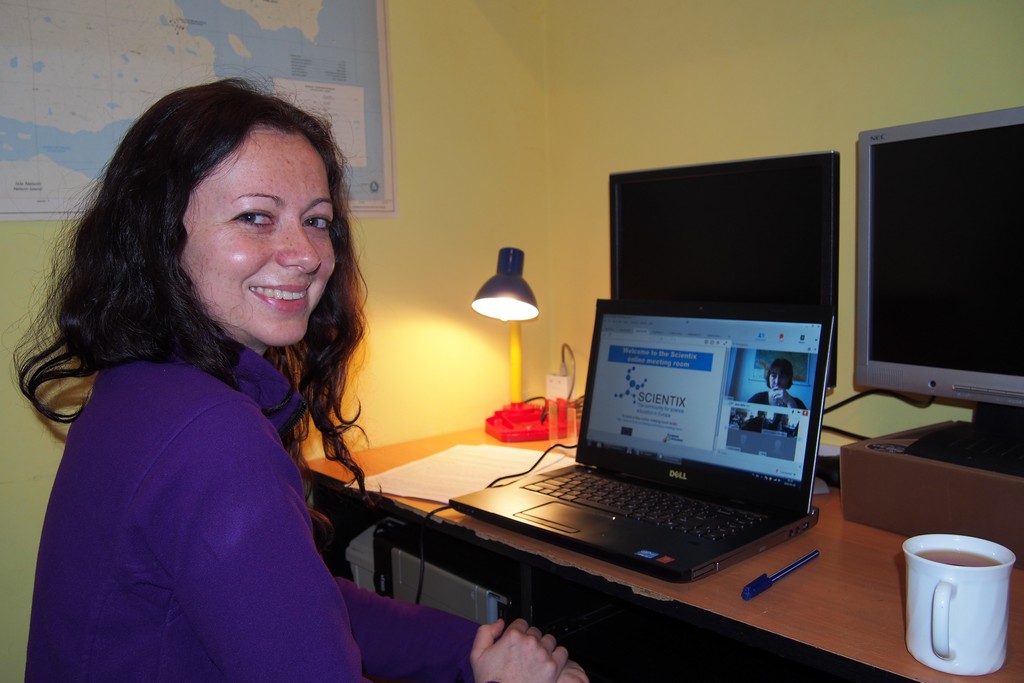 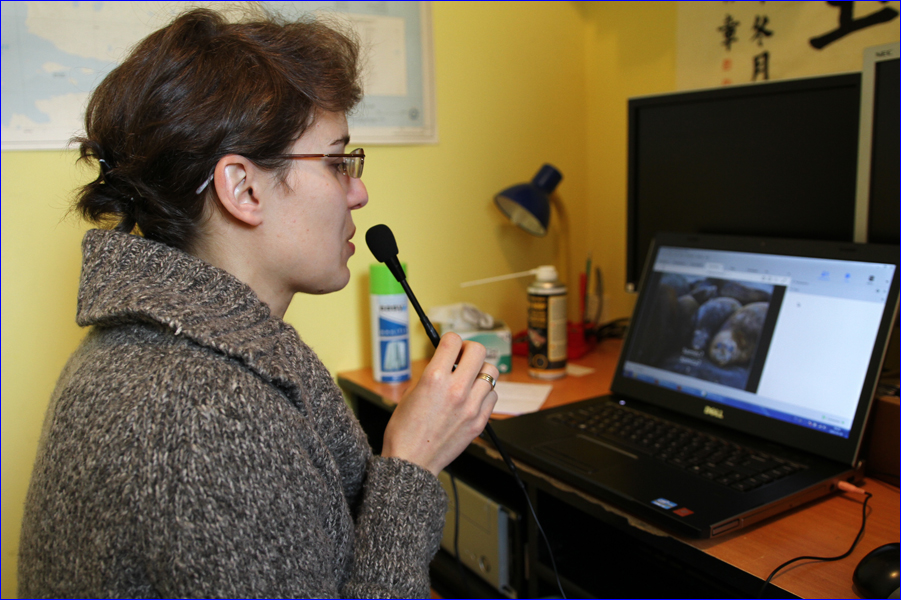 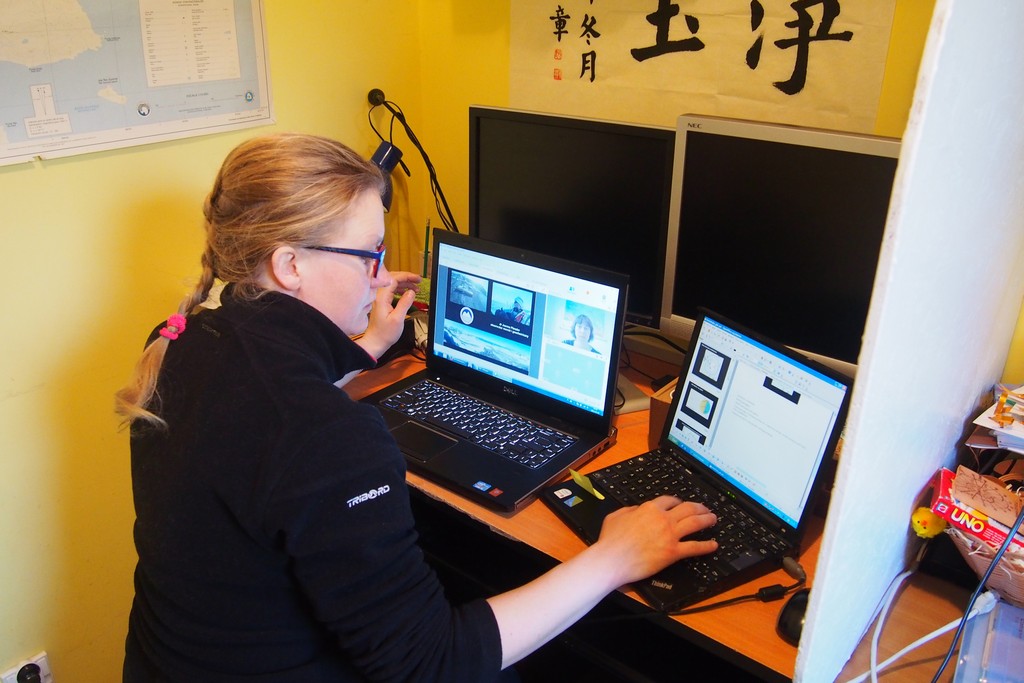 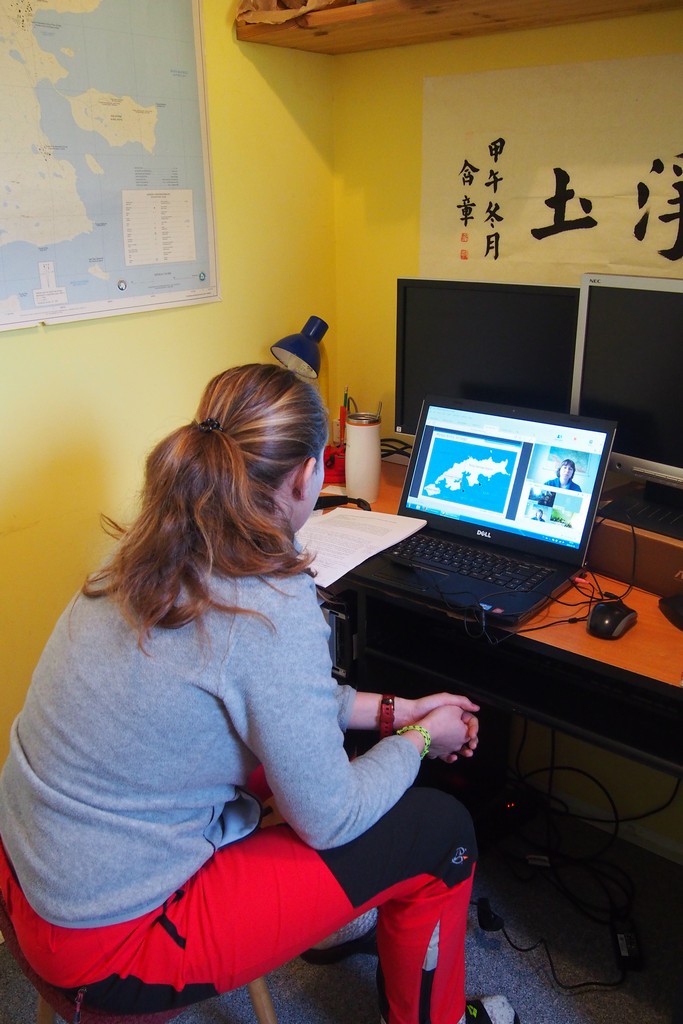 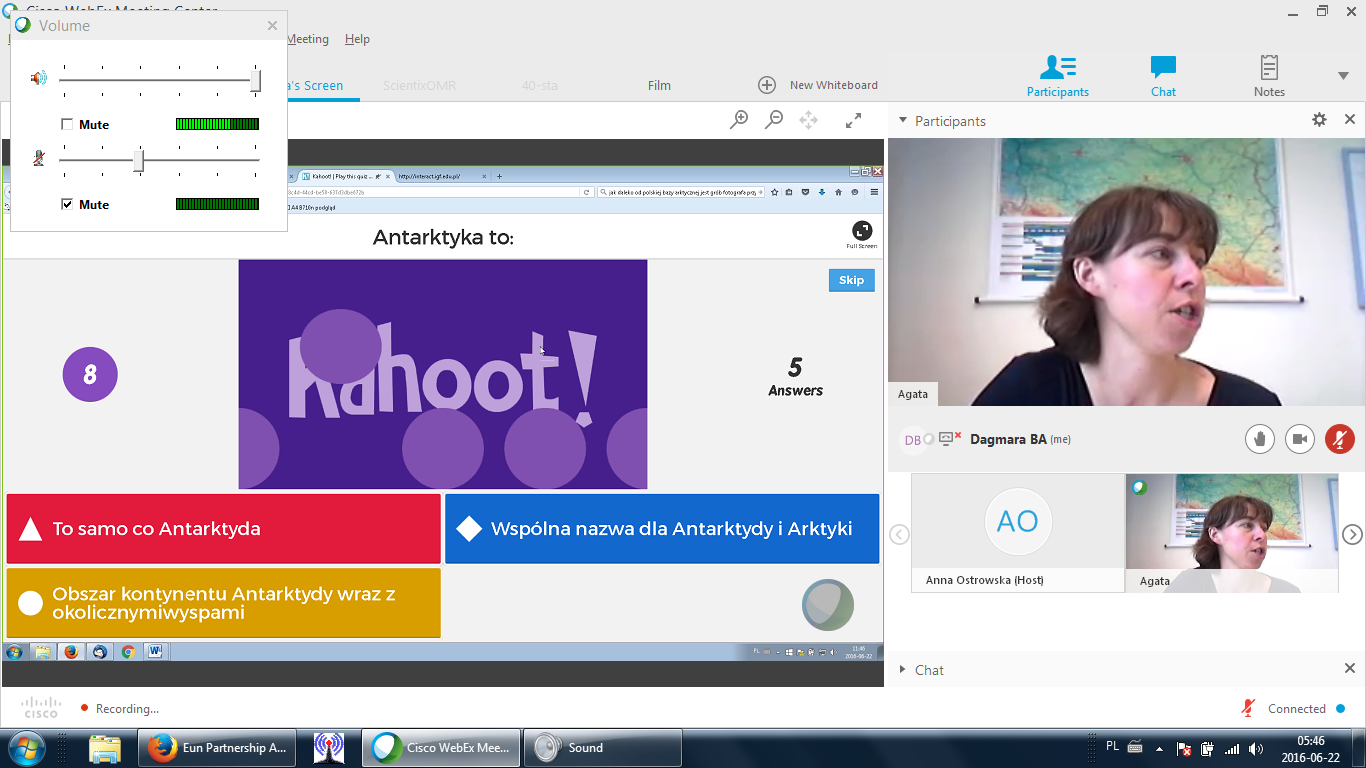 During the transmission we had to look out at the microphone – because of the options to mute the microphone, we could be heard from behind the scenes or we could just speak to inactive microphone.

I just regret not writing all the students’ questions – from these serious ones (do you have children? Do you miss home?), there were also some more creative ones like “Have you eaten baklava?” We even don’t have apples here, uhm… where do you pee? (under ourselves – like our friend quoted) there were also some typical questions like what kind of species of penguins can you meet here? How long does it take to get here from Poland? The weather was main certainty so just before the lessons we checked the basic parameters in special weather program, which displayed data registered by the Automatic Weather Station nearby the Station.

On 22nd June me, Asia and Peter conducted the last transmission in a form of conference for the students to ask some questions. This time we were connecting from the office in the Hall units not as before from the Samolot room (“Airplane” – main building). Just before the transmission one of the connections started to fail so we had to connect to the second one in panic. And when the risk came, that we could not join on time, I forgot the password to mail to write to Agata, I couldn’t even call because outgoing calls didn’t work. Fortunately, we joined the transmission in the last moment.

Of course, one of the nicest moments were those with mails from the schools with thanks and class photos . Below, there is one that charmed me particularly:

“The News straight from Penguin colony


What the Penguin colony is and what is happening there some students of classes IIIb and IIId found out. Thanks to Mrs. Agata Goździk from The Institute of Geophysics Polish Academy of Sciences the children could participate online lessons from King George Island where the Polish Antarctic station is located. The lessons were conducted by Mrs. Dagmara Bożek – Andryszczak, the current participant of Antarctica expedition. The children gathered in front of the interactive whiteboard, they were listening to the stories, they were watching photos, asking questions using the chat options and they were answering the questions asked by leading person.

Penguins colony is a breeding ground for penguins. On King George Island there live 3 species of these birds: chinstrap penguins, Adeli penguins and white brow penguins. The penguins cannot fly but they are great swimmers. During the Winter they drift on an ice floe. Then, they return to the land in order to lay eggs or to change the plumage. I have learnt that the penguin lays about two eggs. To count them, the researchers have to count their nests, take some pictures or send drones. These birds distinguish colours. We are very interested in penguin’s excrement matter. Hungry penguin droppings are green and happy one drippings are pink because of eaten krill. We enjoyed the lesson so much. We would like another online lesson straight from Africa.”

Hmm, why not ? At least, we love challenges. All the materials you can watch on Eduscience Youtube channel.